This is not a show standard, but an attempt to describe the colors to distiguish them from each other. For each color, there might be more or less white guard hairs among the colored ones, giving the ferret a lighter or darker appearence. Many ferrets, like many other species, become greyer with age. More and more white hairs appear among the colored, giving them a more silvery look. This is not the same as roan, where these white hairs appear in the first, full coat. Take into account the color of your ferret as a kit when trying to decide which color it is.

We also don't bother with the color of the undercoat here. It's somewhere between white and yellow, and the yellow color is often a perfectly normal discoloration due to oils produced in the skin. If the coat is very yellow, the guard hairs might appear to have a warmer tone than they actually have.

This is the original ferret color, the color of the polecats (wild ferrets). The guard hairs are black and brown. The eyes are black. 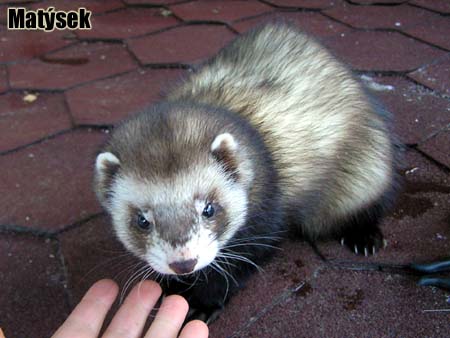 The albinos are completely white (although the hairs can be discolored and become creme to yellow, as mentioned), because this ferret cannot produce any pigment. The eyes also lack pigment, and are red.

These ferrets have little or no brown/black pigment in their fur, only red/yellow, giving the guard hairs a pale yellow/beige/brown tone. The eyes are shades of burgundy. The guard hairs are a warm chocolate brown, no black. The eyes are brown to black.

These are the redheads among the ferrets. Like champagne, they've got no brown/black pigments, only red/yellow, but this is produced in excess, giving the guard hairs a strong reddish tone. Silver ferrets may appear grey to the eye, but their guard hairs are usually a mix of black, grey and white. Many ferrets of all colors grey with age and appear silver after a few years, but the silver ferret should be silver from the first full coat. They do, however, often grey with age too, and may look like dark eyed whites when they get older. Eyes are usually black. Dark eyed whites have guard hairs which are white to cream. They may have some darker hairs sprinkled around, especially along the back and the tail. The eyes retain the pigment, and appear dark burgundy to black.

The black self has no agouti banding in the guard hairs, and will look almost black. When you look at the individual guard hairs, they should be black from root to tip, but the undercoat is white.